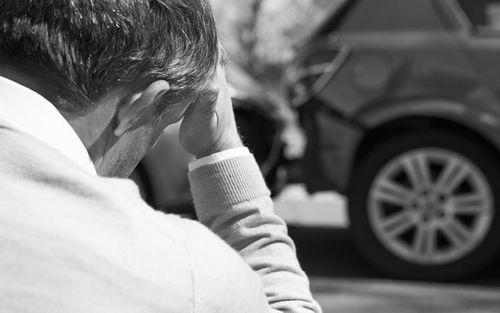 Many folks are surprised to hear that if they are found by a jury to be 50% at fault in relation to all other people at fault for injury or death, they are barred from recovering any amount of damages. Let’s look at an example.

On a quiet Spring day in Fargo, Grandma May is driving to one of her many doctor appointments for the week. In a hurry to get out of her apartment, Grandma May forgets her glasses on the counter. Since she is running late for her appointment, she decides to just continue without her glasses, which are not required for her to operate her car.

That same morning, Jim “Speedy” Smith is on his way to work. Jim is called Speedy by his co-workers, as he is the fastest worker on the assembly line. Speedy is running late for work, and takes a left turn at a stop light, thinking he can make the turn and avoid colliding with oncoming traffic.

Unfortunately for Grandma May, she is in oncoming traffic, and while she is driving the speed limit, she does not see Speedy until it is too late, and the two vehicles collide (learn about being a witness to an accident here). Grandma May is taken from the scene in an ambulance with a broken hip.

Grandma May’s medical bills exceed the $30,000 in no-fault benefits, provided in her vehicle insurance policy. As such, she has an additional $25,000 in medical bills to be paid out of her health insurance, and she experienced pain and suffering for the year and a half it took to recover from her injuries. Grandma May eventually has to file a lawsuit against Speedy, as his insurance company will not step up to the plate and agree he is liable for the injuries, claiming that Grandma May should have seen Speedy and slowed down to avoid the accident altogether.

At trial, Grandma May’s eye doctor testifies Grandma May can see fine while driving without her glasses, but that they may have assisted her in seeing Speedy sooner. Speedy testifies that he thought he could make the turn safely, and still thinks he could have if Grandma May simply applied her brakes for a short second. Speedy admits, however, that Grandma May had the right-of-way.

Simple, right? Since Grandma May did not need glasses to drive, and Speedy agrees that Grandma May had the right-of-way, the jury will only decide if Speedy is negligent.

Not so fast. There is a modified comparative fault statute in North Dakota. Essentially, it states that a jury is allowed to determine the fault of all persons that may have led to a death or injury in what’s known as “a special verdict.” It further states that a party who is killed or injured is barred from recovering any damages from the other party if the harmed party’s fault is equal to the combined fault of all other persons who contributed to the injury.

What does that mean? It means if a party claiming injury or death from an accident is found to be 50% at fault, they are unable to recover any damages whatsoever from the other responsible parties.

The Jury Is Out

Grandma May is happy, because she was not found to be 50% at fault, and therefore can still recover damages. But then, her attorney informed her that the damages awarded by the jury would be reduced by her fault.

This is a simple example. As you can imagine, each case presents different facts, which can be complicated, and complex. That’s why our Personal Injury Team at SW&L Attorneys analyzes each case on its own merits, including all people/companies who may be responsible for damages in the lawsuit/claim, to fight for the damages his clients need to help them to move forward in their life.

If you have been injured in an accident, feel free to contact us at 701-297-2890. All initial consultations are free of charge, and all personal injury cases are handled on a contingency fee basis, meaning there is no fee unless there is a recovery in your case.