Home / Blog / Personal Injury / Whether Or Not The Other Driver Was Cited In Your Accident Doesn’t Matter In Your North Dakota Negligence Case
4.8 Read Our Reviews 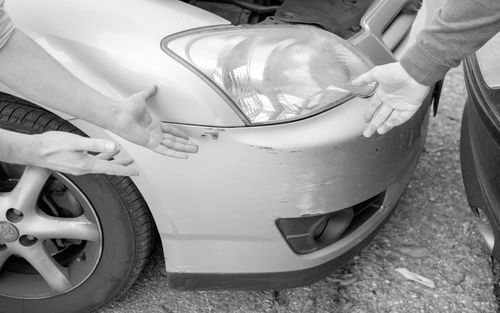 Molly and her daughter go out for some great Black Friday shopping deals at West Acres. While on 13th Avenue, near 42nd Street, they are hit by Lonny who ran a red light. 911 is called, the Police Officer arrives, but because he is now in the Holiday Spirit, he decides not to cite Lonny for failing to stop.

Jim is running late to watch the Vikings beat up on the Packers with his friends. On the way to his local watering hole, Jim is not paying attention and fails to see that traffic ahead of him has slowed down, and he rear-ends Tim. Tim calls 911. The Police Officer comes to the scene and cites Jim for due care.

What Scenario Is Better?

Now, if the general public was to compare accidents when talking about the fault in a lawsuit for negligence, they may feel as if scenario two, where Jim was cited, was better. However, that is not necessarily the case, as the citation to Jim will likely never get in front of the jury, and the Police’s failure to cite Lonny will not either.

N.D.C.C. § 39-06.1-03(4) states if an individual has admitted to or been found to have committed a traffic violation (infraction), it is not admissible as evidence in any civil court. Traffic accidents, such as those in scenarios one and two, will be sued out as a negligence action that will take place in civil court.

In Chewakin v. St. Vincent, 275 N.W.2d 300 (N.D. 1979), the North Dakota Supreme Court followed the general rule that the issuance or non-issuance of a traffic citation was inadmissible because it is irrelevant and potentially prejudicial to the issues in a personal injury action, and is really about the ultimate fault issue that is to be determined by the jury.

Now, like most things in the law, that comes with an exception. In cases where the testimony is needed to impeach an officer’s credibility, the evidence can come in at the trial court’s discretion. While the Court’s discussion about the exception dealt with a Minnesota case, the Court cited to testimony by an officer indicating that immediately after the accident, the defendant admitted he was driving in excess of the speed limit. In that case, however, the officer had not cited the driver for speeding. In that circumstance, the non-issuance of a citation was allowed to impeach that officer’s testimony about the admission of speeding.

I know you are thinking, “how can a citation not be used against someone who caused the accident in which you were involved?” Let’s go back to our factual scenarios. In factual scenario one, it would be unfair to Molly if it were admitted into evidence that Lonny was never cited, even though he clearly ran a red light. Just because the officer was in a good mood, should not sink her case. However, Molly can still present other evidence showing she had the right of way.

In factual scenario two, while it may be nice to present the citation to the fact-finder, it is not fatal to the negligence action, as you will still be able to prove that Jim was not paying attention and rear-ended Tim.

As you can see, barring the citation evidence can cut both ways; it isn’t always a bad thing. In both scenarios, it will be up to the jury to use their common sense to find that the party who caused the accident was negligent, even though there is not testimony related to a citation.

If you have been injured in an accident, and are looking to consult with an attorney, please give our Personal Injury Team a call at 701-297-2890, or email us below. All consultations are free of charge, and any case for personal injury is on a contingency fee basis only.