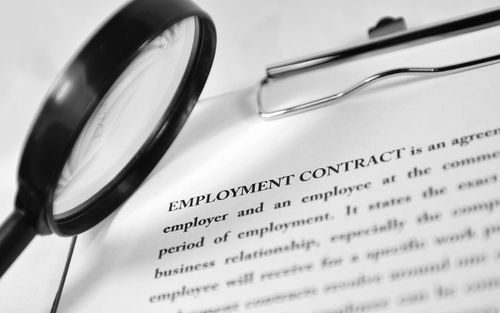 You want to leave your job for a better one down the road. But you may have already signed a contract that prevents you from taking that better-hours-and-better-pay job. Employment contracts often contain a non-compete agreement. For employment purposes, a non-compete agreement, or covenant not to compete, is a promise by an employee not to directly compete with the employer’s business if the employee leaves the employer to find work elsewhere.

If you cease to be an Employee because you are terminated for cause, or during your term of employment you voluntarily terminate your employment with the Company, during the immediate two years after termination you may not, without the Company’s  express written consent, directly engage in or participate in any activity that competes, directly or indirectly, with any Company product or service that you engaged in or participated in which allowed you confidential information during your employment with the Company, including, but not limited to, any business in the buying, selling, leasing, manufacturing, repairing, or otherwise associated closely with automobiles.

In plain English, this provision means that Bobby cannot quit the Ford dealership during his three-year term of employment to cross the street and work for the General Motors dealership without permission from Ford. Bobby must wait two years from the time he leaves Ford to work for any competing company, which, according to the contract provision above, seems to cover all automobile manufacturers. And if Bobby wants to leave Ford to open his own independent auto body shop, he must wait at least two years.

Bobby has a very particular set of skills he has acquired over a long career as a mechanic. How is he to make a living for the next two years?

Employees like Bobby generally do not have the bargaining power to negotiate this type of provision out of a contract. If Bobby did not agree to the provision, chances are Ford would be able to find another mechanic who would sign the non-compete agreement without realizing the consequences.

In North Dakota, noncompete agreements are frowned upon. Every contract where one is restrained from exercising a lawful profession, trade, or business is void. There are two exceptions:

The intention of the North Dakota statute is to promote commercial activity. Contracting for future employment is an essential part of “one’s ability to exercise a lawful profession, trade, or business.” Herman v. Newman Signs, Inc., 417 N.W.2d 179, 181 (N.D. 1987).

North Dakota’s statute provides protection to the employee where the employee may not otherwise have the bargaining power to remove a noncompete agreement from the employment contract. In Bobby’s case, he would be free to leave Ford and immediately work for GM without worrying about the threat of a lawsuit from Ford.

I am one of the attorneys at SW&L. If you have questions on whether your employment contract is legal, contact our Business Law Team at 701-297-2890 or send us an email below.

The information contained in this article and on this website is for informational purposes only and not for the purposes of providing legal advice. You should contact an attorney to obtain advice with respect to any particular issue or problem.